anyone for manure? words and photos

So there’s been a fair amount of press over a wee idea we had not very long ago.  It’s crazy what captures the nation’s media and the public imagination, and we just thought we were having a little joke – that we might just make it into one of Clarkson’s columns…

Along the epic journey from Stroud to Oxford (4 days on the road, blisters, aching muscles, two girls down with some form of ill) we began to wonder whether it might be time to start targeting all those nasty big-time carbon emitters.  It’s true that since this roadshow begun we’ve circled Heathrow Airport and held a picnic at London Oxford Airport, but we haven’t Really done a funny and engaging action.  So… we began to think – we can target high carbon infrastructure or we can target high carbon individuals.  And if we’re targeting high carbon individuals then the people we want to draw attention to are those who promote carbon intensive lifestyles.

Enter Jeremy Clarkson…  well a mate of mine saw him zooming between Stroud and Oxford so we thought he must live nearby.  A few phone-calls later and it was confirmed, if we could find our way to a small village in Oxfordshire then perhaps we could make some headlines.

But how?!  We’re a very peaceful group really.  We didn’t want to do anything that would piss Jeremy off, especially as some of our members are big big fans of Mr controversy Clarkson.  Yet we did want to make a point.  Cause let’s face it, he says a lot of stupid things…

“But let’s just stop and think for a moment what the consequences might be.  Switzerland loses its skiing resorts?  The beach in Miami is washed away?  North Carolina gets knocked over by a hurricane?  Anything bothering you yet?”

Now I’m guessing that this is said with his tongue firmly in his cheek but some people, probably a lot of people, are going to take him at his word, and chuckle at his ‘give a shit’ attitude.  Clarkson’s left some things off the list – the Great Barrier Reef collapsing, sea rises that wipe out entire cities, massive resource wars, no more Bangladesh, potentially the Amazon rainforest turning into a massive bonfire, and carbon emitter.  These things bother me.  I don’t want to live in a world where the richest nations say ‘fuck you – I like my quality of life’, whilst the poorest, those least responsible for climate change, go to war.  It’s difficult.  Like Jeremy I like my liberty.  I just know that a future of climactic collapse is probably not a future where civil liberties will reign high.  I guess the big question with freedom is how much value does it hold if it relies on others' enslavement?

Anyhow.  We didn’t want to be mean.  We just wanted to give him something to think about.  As we were mulling this over behind the horse and cart, Blossom, our youngest mare, lifted up her tail and out dropped eight balls of manure.  We watched each one drop and a plan began to form.

For our horse drawn climate roadshow the main emission is what our horses are laying on the road.  It would be a cool comment on Jeremy’s approach to his emissions if we were able to dump ours on his lawn and at the same time give him free fertiliser!

With hands gloved we began bagging the manure.  As we bagged we hummed a tune, finally adding words and singing…

And my top speed trot is only 12 miles per hour

But the oil is running out and fast

And my engine just runs on grass

So what you gonna guzzle in all them cars

If you think it’s not a problem then I think

You’re talking out of your arse.

You don’t give a toss about your emissions

And you took a big truck on an arctic expedition

But the footprint of your little spin

Was one point seven tonnes of carbon sin

And it’s nothing to the damage black carbon can bring

So we thought we’d dump a taster

Of the shit we know you’re landing us in!

Eventually (and after pinching more poo from a nearby field) we had enough – a whole lotta poo.  Then came the organising of a chip-fat fuelled van.  Three calls and it was done.  All we had to do now was wait by the roadside for our carbon-free lift.

When we arrived the press where already snapping.  We walked up to the wrought-iron gates of Clarkson’s home, hitching up our Suffragette skirts so that we might just walk in, but no such adventure – instead the gates just opened ahead of us.  Thank God for motion detectors.  The photographers were scared of being arrested for trespass so stayed firmly outside the compound’s gates.  We dumped six bin-bags full of poo before sticking out banner in it ‘This is what you’re landing us in’, and singing our song to the film crews.

Two of Jeremy’s staff walked past but said nothing as we approached his house.  But there was no-one at home, so we left him a little pile more before heading off home.  In the bus back our song rang jubilant, especially when we passed the daily mail photographer who’d been pulled over by the police.  We zoomed past unnoticed.

And then the reaction… a tonne of press – more than we got for rushing Parliament with over 1000 women, staging a sit-in at Heathrow Airport with over 600 Edwardian picnickers or supergluing ourselves around a statue in Parliament.  It can be strange to see what gets people talking – I guess there really is nothing like a celebrity to stir up headlines.  Which seems a bit of a pity when there’s such an important message to get out there, something that should be saturating all of the papers all of the time.

But thank you Jeremy for your jolly response.  You can keep the patio heater – and good luck with the roses – we’ll have plenty more manure from the final two weeks of the journey if you need it. 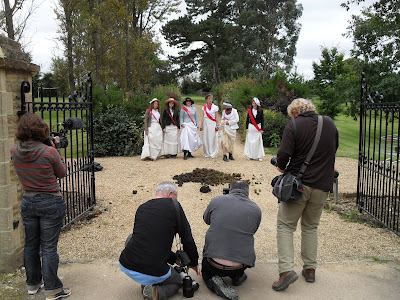 Press at the ready... 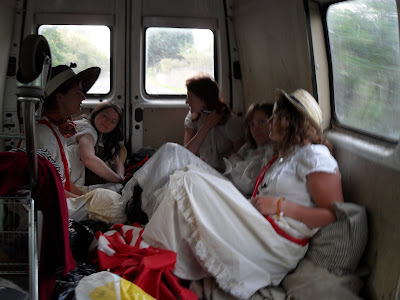 In the back of a chip fat fuelled van, on our way to the controversial man. 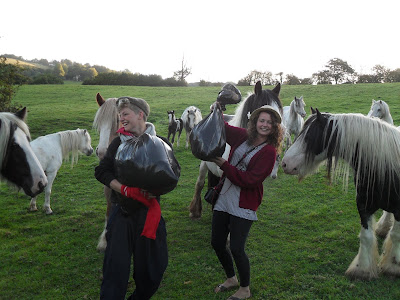 My bag's bigger than yours... 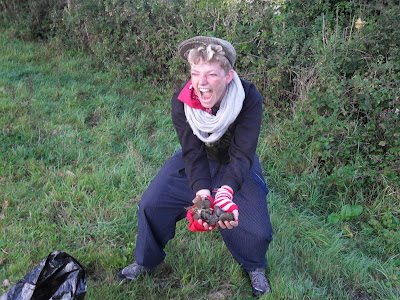 Anyone for some poo on ice? 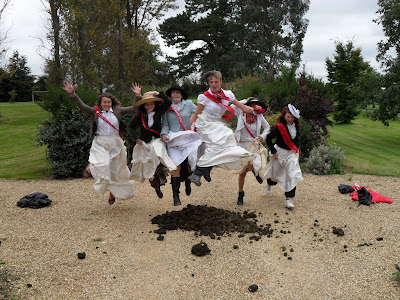 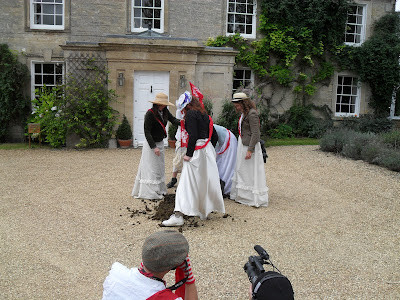 a small pile for his front lawn 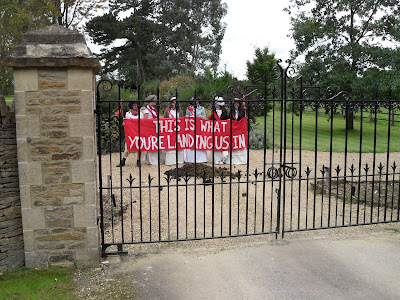 and then they close again 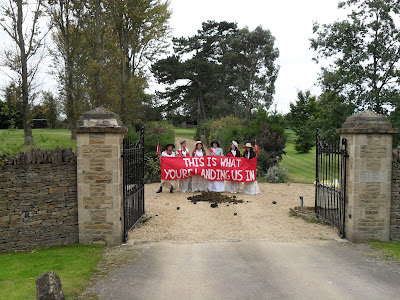 As if my magic - open Sesame! 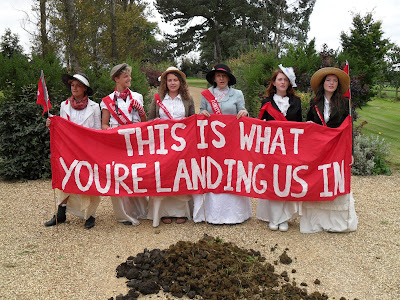