From campsite to campsite 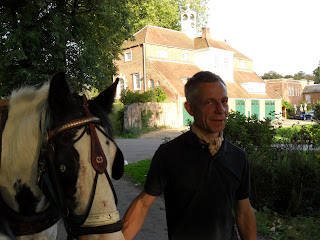 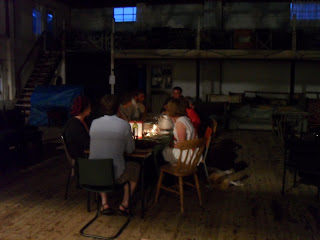 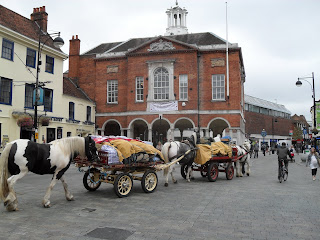 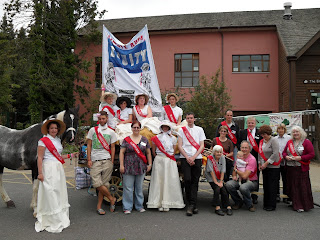 The day began under with a slow wake up surrounded by six other sleeping bodies, squashed sardine-style under a tarp draped between the two carts. Dash had spent the night round my feet, which was great for me, but not so great for Joie, who had him nibbling at her eye-brows most of the night. Kicking him off and crawling out from beneath the cart wheels, I grabbed my laptop and took it up to the outside power source to charge before the journey. The socket was in the wall, hidden in the leaves beneath an ivy root - usually used by film crews. Back at the camp, the group was getting up, setting a fire, cooking porridge with one of my mother's out-of-date fair-trade Geobars for flavouring. A quick pow-wow with Tamsin, a shopping list of things to find in High Wycombe, and she set off with Vlad by bike, ahead of the walking crew.

Jennifer, who owns the place, came out to offer us some lemon drizzle cake from her freezer as we packed up. She'd already been so incredibly kind, and it was very touching. Shortly after 10am we set off - over Hall Barn's private motor-way bridge over the M40, up into Beaconsfield and along the A40 to High Wycombe. A few passers-by looked nonchalant as we dashed through the traffic to hand them fliers. Others ignored us altogether. Then we saw someone running down the road towards us - a woman with a three year old in her arms and hand-in-hand with a girl of about eight, both kids in their pyjamas, clearly so excited to have seen us they had to run out of the house half-dressed to follow us.

Surprisingly, we didn't pick up a police escort until a couple of miles down the road, which was odd considering we'd had a pretty persistent tail throughout our journey the day before. Eventually a woman in a high viz jacket joined the trail and told us we should have informed her that we were on the road. Weird how little communication there is between departments.

Finally we made it into High Wycombe and down to the Environment Centre, where we were met by its volunteers, members of the local Transition Town and a District Councillor. The press were late, so we unsaddled the horses and went upstairs to tuck into the lunch they’d kindly prepared for us. When the photographer finally turned up we got into our costumes and handed out sashes – 8 month old Naomi got tucked under a red ‘no new coal’ sash, and even the journalist who’d interviewed us joined in the picture, branded.

We left the centre richer by a pot of local honey and five huge courgettes, flowers still intact. Having got into our costumes it seemed a shame to take them off so we marched down the drive in full-on Suffragette outfits, attracting the attention of a group of ladies-of-a-certain-age playing croquet. Tamsin and Elly ran over, standing on tiptoes to hand them some fliers over the hedge. We kept fliering as we marched into town, trying to engage the bemused locals while keeping up with Kim’s 5-mile-an-hour pace. It was hard to gauge their reactions. We stopped outside Primark for a photo and then at Morrisons for some food; at the latter a woman came and gave us a flier about her project (getting people from ethnic minorities and with disabilities into horse-riding) and a tenner as a donation. Sweet.

As we headed out of the town a woman opened her front door, pointing out the horses to the baby in her arms.  Alice and I went to hand her a flier and it turned out she was a member of the Transition Town but hadn’t been able to make it down to the Environment Centre that day. ‘I don’t really like living here’ she said, ‘it’s not radical enough for me.’ We laughed, and she continued. ‘I don’t get to go on many demonstrations these days… but we’ll be going to London in December, won’t we?’ The baby stared up at me. I wondered if she knew about our plans for the Stop Climate Chaos march, and how she’d feel about taking someone so small into a situation that might prove more radical than she was expecting.

The last leg of the journey took us up to Pigotts farm, which is where I’m writing this from. It’s a very special place to me – site of a music camp I’ve been coming to since I was three weeks old, backdrop of my very earliest memories, but also a place I’ve spent less time at this year than in any of my 24 years. Activism can be all-consuming, and it’s nice to stitch together these different parts of my life, to see Nick (who owns the place, and who has known my mother since she was born) talking about wood carving with Brad and telling Pat that he might know some of his distant cousins.

Now I’m using their wifi across from Vlad, who has found the costume store and donned a long curly blonde wig like a Polish transvestite. He is humming the bawdy homoerotic folk song he taught us all round the fire last night. Tomorrow we set off for Haddenham, the village I grew up in. I am unbelievably tired, but somehow I know that the minute we start walking I will be energised again. It’s a good feeling.