Brill School is Brill, so too Aylesbury Fayre 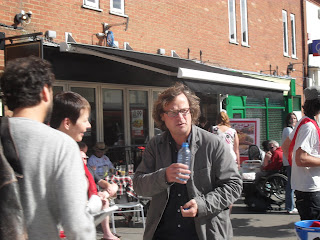 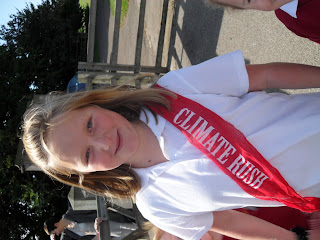 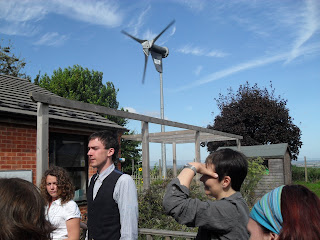 Tamsin writes:
Today was a hectic day.  First we split in to three groups - the stay at camp and make it pretty enough to fit with the most picturesque surroundings of Haddenham group; the go to Brill school with Caroline Lucas MEP group; and the go into Aylesbury to prepare for the Aylesbury Green Fayre group.
The three groups were busy busy - I met Caroline at the station before heading to an incredible example of all that a school can do at Brill. Two wind turbines (one huge), a lot of photovoltaic cells, a carbon neutral building, organic garden and more.  Lots of sweet young things running around and growing up in such blissful surroundings, learning about all what their future will look like, and how they should deal with that. Unfortunately, Brill has no public transport and though we tried to get there the carbon neutral way (on our own two feet) it was totally impossible to get to without a car for at least a bit of the way.
And then it was us in Aylesbury waiting for Hugh Fearnley-Wittingstall and BBC Oxford ready to begin our fayre.  It was a haphazard affair but it actually worked.  A lot of Aylesbury folk peering from above their mid-afternoon pint and slowly being cajoled into joining by Caroline Lucas's smile, words and the fliers she gave out on our behalf.  What an honour to have her along with us!
Joie managed a cardboard city where kids built their vision of a sustainable Aylesbury, Alice and Elly wrote postcards to the local green candidate, we charged phones from our solar panels, called a ceilidh whilst Hugh charmed the crowd, moving from person to person and answering their worries about local food and produce. Vlad blagged a whole load of pears and plums from the garden at Bucks County Museum, and someone turned up with load of fresh artichoke hearts which we peeled with a knife from the pub next door. At 6 the zines turned up - the harvest issue of Here Comes the Sun (make friends with her on facebook http://www.facebook.com/profile.php?id=1808930533&ref=ts) full of celebrities responding to climate change and a beautiful poster of UK endangered species by Harry Malt. The perfect thing to hand jaded Aylesbury shoppers.
I took the 'personalities' back to have a look at our camp, for delicious cider around the fire as the sun set.  Soon the others will be back from town - tomorrow will be a quieter day just staying in the village.
XX CR
Posted by CLIMATE RUSH at 11:45