Here at the Climate Rush we are not against speed.  No way.  So when Dale Vince, founder of ecotricity, invited us (one day after our Top Gear Poo Stunt) for a ride in his mega fast electric car (from 1 to 60 in four seconds) we just couldn't turn him down.  And what a ride we had.  From the heart of Stroud to the first turbine that the great man built, just over ten years ago.  Before he was Green eco-tech Entrepreneur extraordinaire Dale Vince was a traveller, living on hills and verges for fifteen years, also living off-grid.  He got in tune with his wind turbine and one day, deciding it was time to lay some roots, he decided to build a turbine that could power not one, but 400 homes.  That was the turbine that we were driven to see (a drive that cost the environment ZERO emissions) and from that starting point came a business that sees £37 million turnover.  All profit is paid into building new wind-turbines, a step away from the bonuses for shareholders business model that we are all so used to.  What a wicked man.  And what an inspirational story.  He began ten years ago and in ten years time he pledges to be one of the big six energy companies - to have as many as 1 million members.  And why ever not.  If there is one thing that Dale is king of - it is inspiring you to believe that with enough will power each one of us could completely change the world.  Long may the fire he put in our bellies this morning burn.
After the spin in his car he took us back to our camp, posed for some photos with the local press and enjoyed a black camp-fired tea.  After our shenanigans with Jeremy C it felt so good to remember that the future is all about progress - clean, sustainable, joyful progress - the kind of progress that we don't have to feel bad for.  The kind of progress to celebrate. 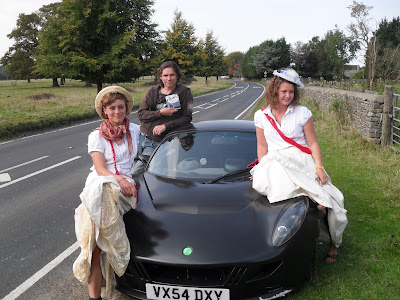 Joie and Milly get comfortable with Dale and the bat-mobile 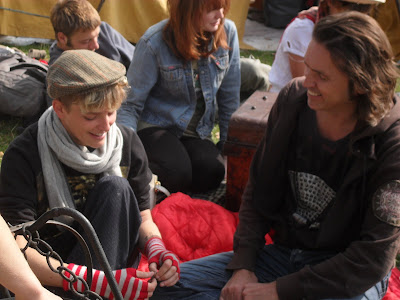 Dale and Tamsin - such mutual loving round the fire 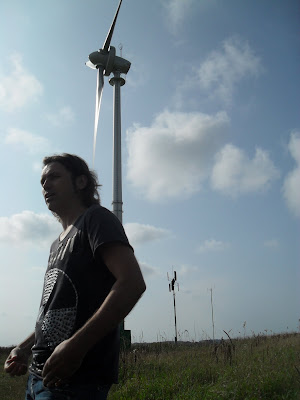 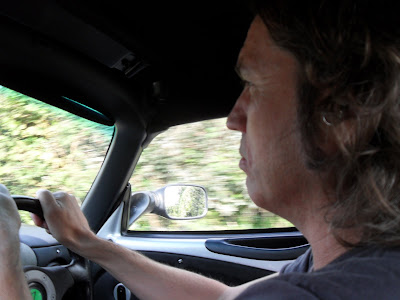 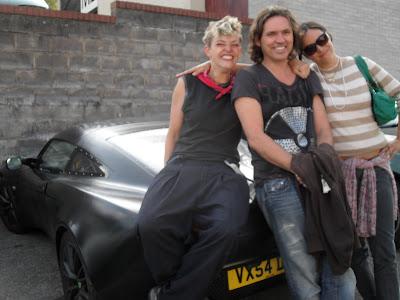 Tamsin, Misty, Dale and sexy sexy mother of a car.
Posted by CLIMATE RUSH at 05:55